The arroyo chub is native to the streams and rivers of the Los Angeles basin, including the Los Angeles, San Gabriel, San Luis Rey, Santa Ana and Santa Margarita Rivers. This species is scarce due to stream degradation and habitat loss.

Arroyo chub is most common in deep, slow-flowing streams with sand or mud substrates. They feed on plants such as algae and water fern, and on invertebrates, including insects and mollusks.

Spawning takes place in pools and edge habitat from February to August. Eggs are deposited on submerged vegetation and typically hatch in 4 days and the fry stay on the substrate for a few days before rising to the surface to stay among plants and over cover for about 3 to 4 months. Arroyo chub move and disperse up or downriver in search of suitable preferred habitat. 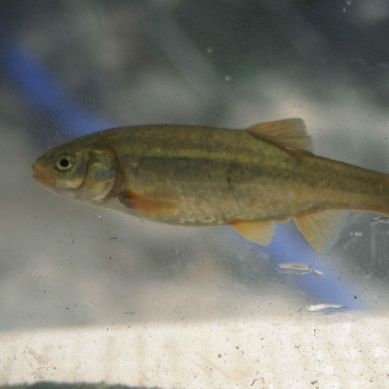 Management includes maintaining connectivity of streams and creeks to facilitate movement between populations. Stream refugia are protected from nonnative invasive plant and animal species. And barriers to movement are removed. Last, captive head starting can be used to reintroduce arroyo chub into suable habitat.

How you can help: Don’t release your pet animals into your local creeks and streams as they can harm the arroyo chub.