The arroyo toad ranges from San Diego to Ventura County, and is known from the Upper Santa Ana River and Cajon Wash basins. They are scarce due to habitat loss, and stream and river degradation.

Their habitat includes shallow, slow-moving stream and riparian habitat that are naturally disturbed by flooding and water flows, including streams and washes with sandy banks with an open vegetation structure. Tadpoles eat loose organic material such as detritus, algae, bacteria and diatoms. Adults feed mostly on snails, crickets, beetles, ants, caterpillars and moths.

Arroyo toad breeding is from late January to early July and occurs in sandy terraces within shallow pools, low-flow stream channels and oxbows. They are mostly active from January to August, and move to upland areas after the breeding season. They can move over 1 km from streams and rivers where they burrow for the drier summer and fall periods. 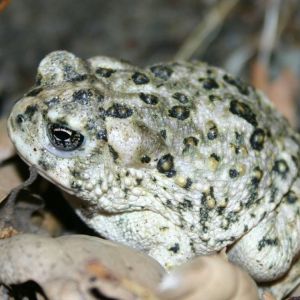 Arroyo toad are threatened by habitat degradation and loss due the construction of dams and reservoirs, mining, agriculture and other detrimental activities that alter stream flow and suitable breeding habitat. They are also impacted by nonnative predators, such as bullfrogs, crayfish, and African clawed frogs. Nonnative plant species, such as giant reed, pampas grass and tamarisk also degrade habitat and damage breeding pools.

Management actions include the removal of nonnative plant and animal species, other habitat restoration activities, such as stream channel repair, and better water flow management

How you can help: Don’t release your pet animals into your local creeks and streams as they can harm the arroyo toad.