Least Bell’s vireo are known to occur from Santa Barbara County south to the border with Mexico. Historically their range extended into the Central Valley of California. The range throughout the Upper Santa Ana River planning area where there is suitable habitat, with the largest population being in the Prado Basin. They migrate each winter to Mexico. They are scarce due to habitat loss and degradation.

Least Bell’s vireo are known to occur in riparian scrub and woodlands that have a heterogeneous vegetative structure. They tend to nest a few feet off the ground in species such as mulefat and willow and will return to the same breeding area year to year. Their diet is mostly insects, which they capture from gleaning and hovering. 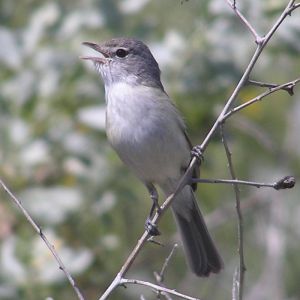 How you can help: Try to avoid using pesticides and herbicides at your home.