The southwestern willow flycatcher has a breeding range that includes Southern California, Southern Nevada, Utah, Arizona, New Mexico and Colorado. This species has been recorded in Cajon Wash, Waterman Creek and other locations within the upper Santa Ana River plan area. They are rare primarily due to habitat loss and degradation.

Southwestern willow flycatchers are a migratory species that arrive on the breeding grounds in early May and breed through August. In Southern California, southwestern willow flycatchers are found in riparian habitat along rivers, streams or other wetlands. They mostly occur in vegetation communities dominated by willow species. Their diet is mostly insects such as bees, wasps, flies and beetles. 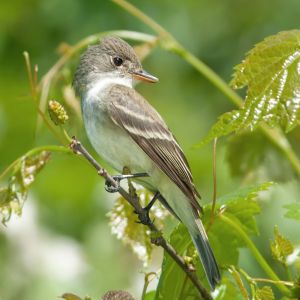 The primary threat to the southwestern willow flycatcher is the loss, modification and fragmentation of suitable riparian habitat. Nonnative plant species, such as giant reed, also degrade their habitat. Management includes habitat protection and restoration, as well as brownheaded cowbird trapping.

How you can help: Please try to avoid using pesticides and herbicides and they can be detrimental to the insects that the flycatcher needs for survival.