In California, only three core areas support breeding yellow-billed cuckoo, along the Sacramento, Kern and Colo-rado Rivers. However, they have not been observed in the Upper Santa Ana River planning area since 1989.

Cuckoos are migratory, and arrive in California from late May and return south in late summer.

Habitat for the species varies upon locale, but generally consists of willows and cottonwoods.

Yellow-billed cuckoo are insectivores and eat species such as cicadas, grasshop-pers, crickets, and caterpillars. Breeding occurs from June to August; and in some cases, they lay their eggs in the nests of other cuckoo. 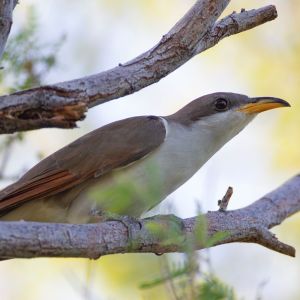 How you can help: Please try to avoid using herbicides and pesticides as residuals from these products can impact insect species which the cuckoo relies on for survival.