Yellow-breasted chats are known from the western United States, and in Southern California between the coast and the Colorado River. They occur sporadically in Riverside and San Bernardino Counties within the Upper Santa Ana River planning area which they migrate to during the breeding season.

This species occurs in riparian habitats dominated by cottonwoods, mulefat and willows. Nests are generally built near waterways along borders of rivers, streams and creeks. Yellow-breasted chats primarily eat insects and spiders, but also are known to east fruits and berries. They arrive in March and April and breed from May to August. 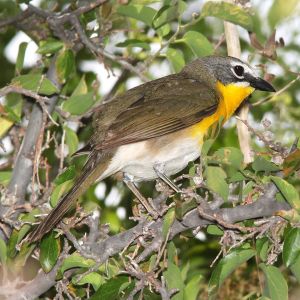 How you can help: Please try to avoid using herbicides and pesticides as residuals from these products can impact insect species which the chat relies on for survival.